Alicia and Austin’s wedding was a beautiful celebration of their relationship. The design was inspired by the bride’s Yankton Sioux Native American heritage; the rich art forms, powerful design motifs, and unique methods of visual storytelling crafted the design strategy and influenced each selection.

The letterpress invitations were pressed into a suede-textured paper. The warmth of the rust-colored ink provided a nice contrast to the blue duplexed paper and envelopes. The Pendleton-inspired diamond pattern and cleverly-composed monogram added a modern touch to the formal suite. Blue leather cording and foil-stamped wooden tags accented the paper.

Cocktail hour and dancing took place in a tent featuring a suspended installation of 30″ white fringe – reminiscent of the long, straight fringe adorning the tribes of The Great Plains. The installation’s welded tracks were arranged in an arabesque pattern, so that any breeze would stimulate soft and rhythmic swaying motions in the fringe much like the movements seen during a Native American ceremonial dance.

The tent walls were cladded with wooden panels with an angular pattern to contrast the delicate fringe installation. A 12′ bar with laser-cut panels to match the invitation anchored the far end of the tent. Gold and wood shelving was accented by sconces made from welded iron rods that bore visual similarities to the hair pipe breastplates worn by the Plains Indians. The opposite side of the tent included the tiered wedding cake adorned with hand-torn wafer paper to embody the spirit of the fringe installation. The cake was placed near the escort display made from laser-etched blue leather triangles that collectively formed a Pendleton pattern.

For the dining tables, we selected a patterned linen that featured turquoise, rust, and citron. The place settings included selections that had handmade qualities and/or were made from humble, earthy materials. A woven charger was layered with ceramic blue china that complemented the natural-linen texture of the table linen and added a soft gradation of color from the linen’s most dominant turquoise hue. Natural-wood infinity chairs were selected for their silhouette’s reminiscence to a dream catcher while two-tone flatware added a masculine and modern edge to the setting. Lush centerpieces composed of romantic blush and ivory blooms were arranged in ceramic vessels with textured foliage foraged from the fields surrounding the wedding site. Rattan and pleated glass votives were scattered down the table to add a soft glow of candlelight.

We designed a menu that was pressed with a rust-colored ink to emphasize the table linen’s accent color. Hand-loomed beaded bracelets accented the menus and doubled as a take home favor. The head table was emphasized with two “clouds” of citron-painted eucalyptus that were arranged with beautiful movement that encouraged your eyes to dance down the focal table. 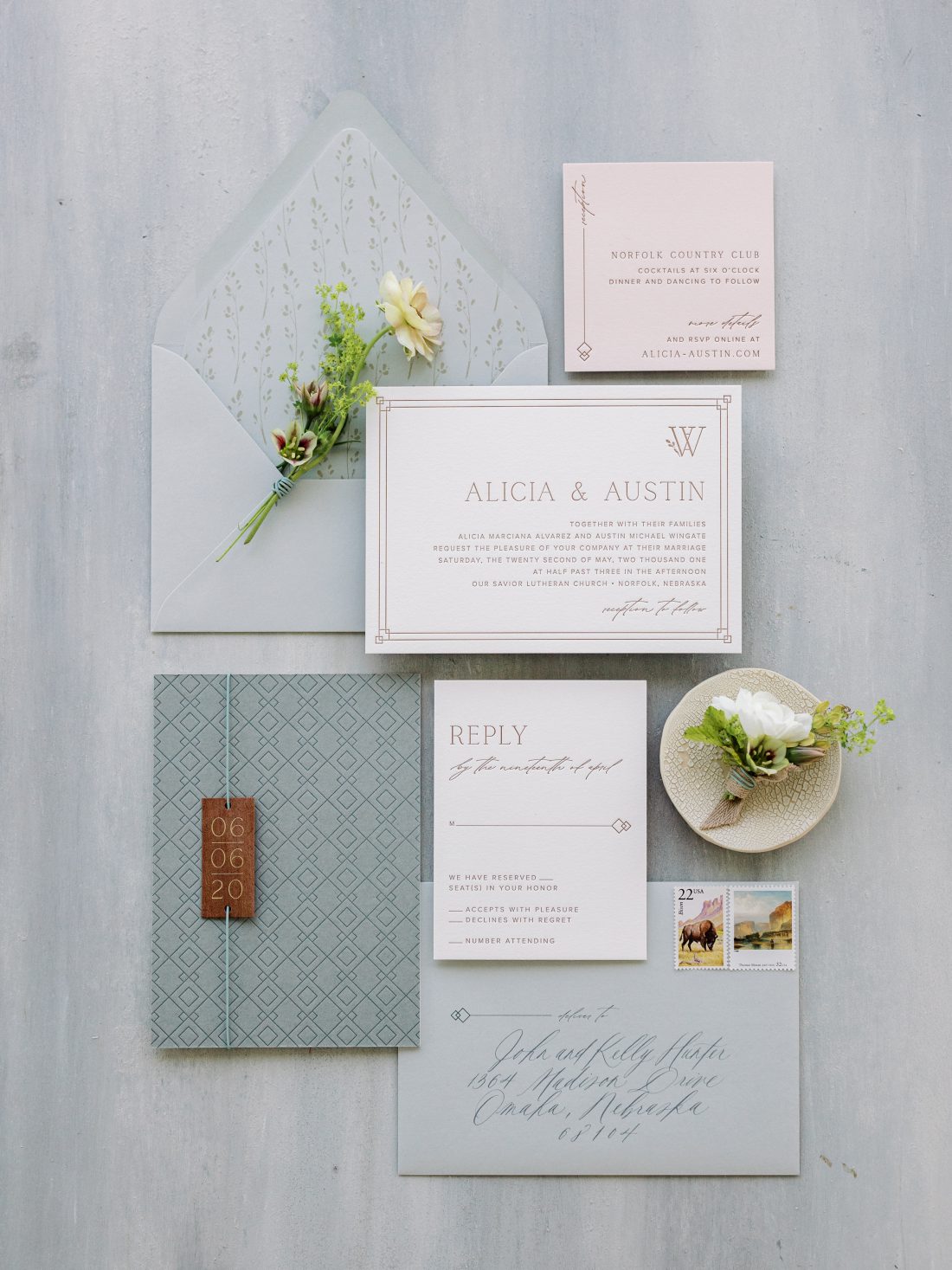 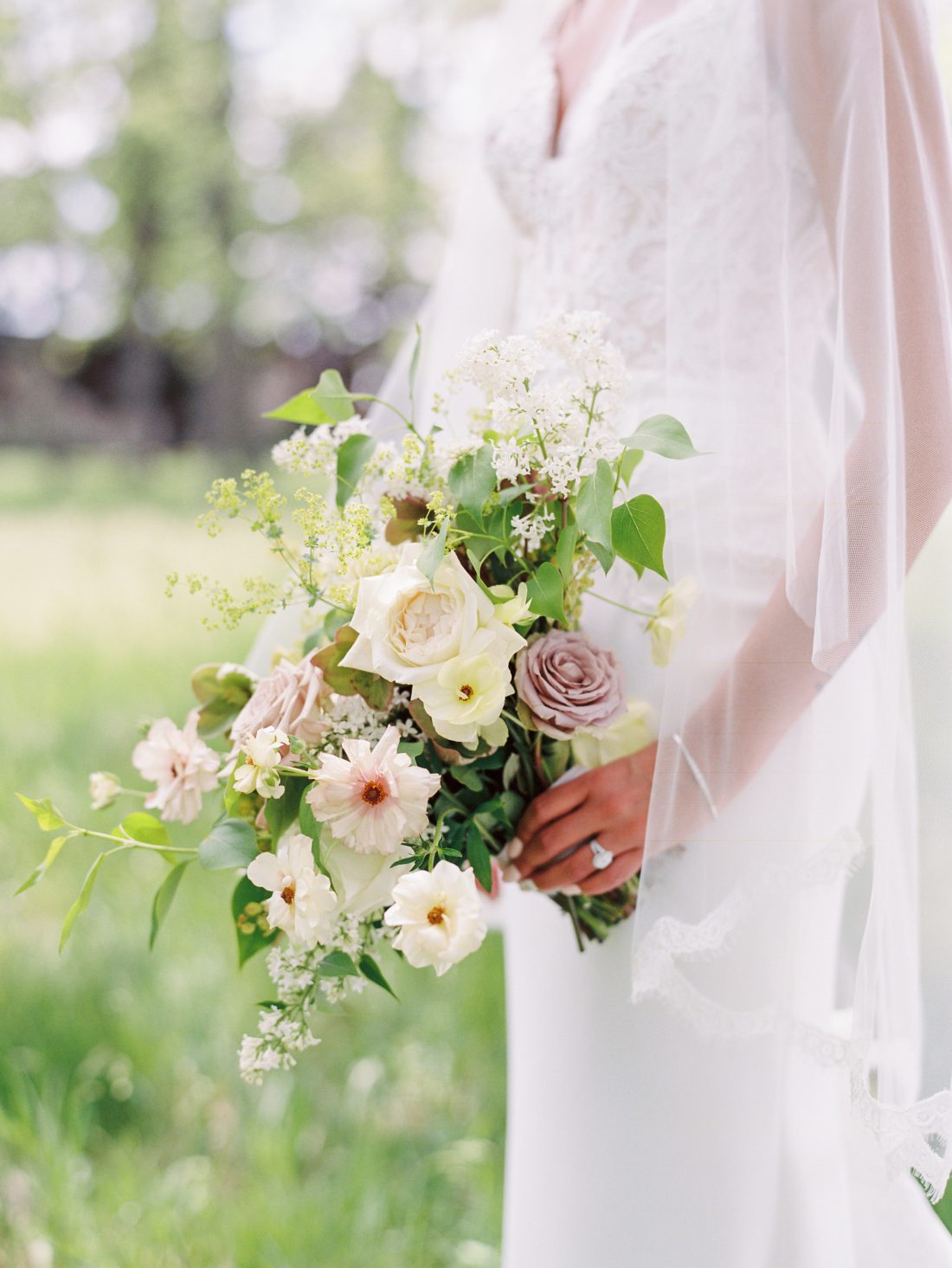 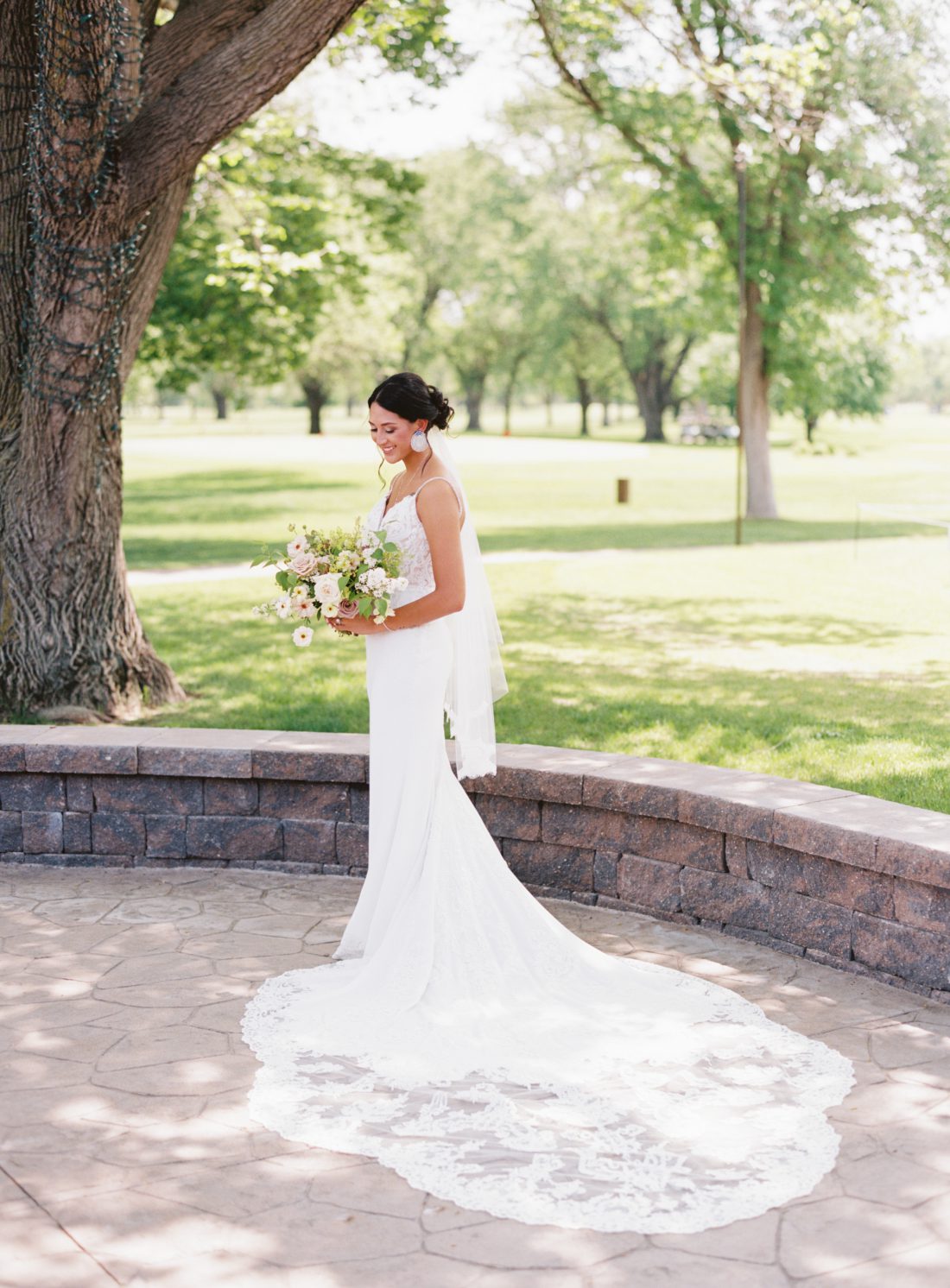 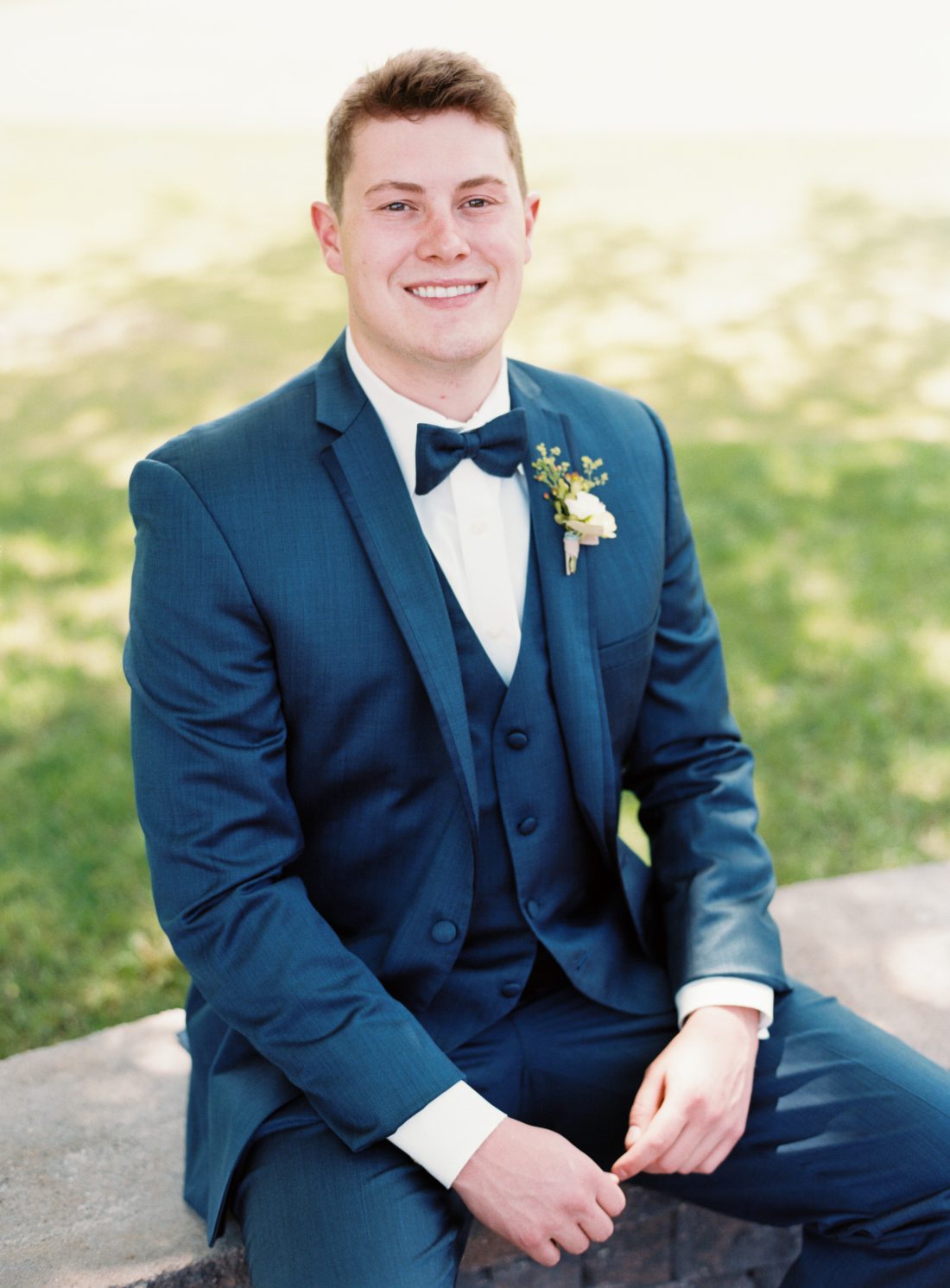 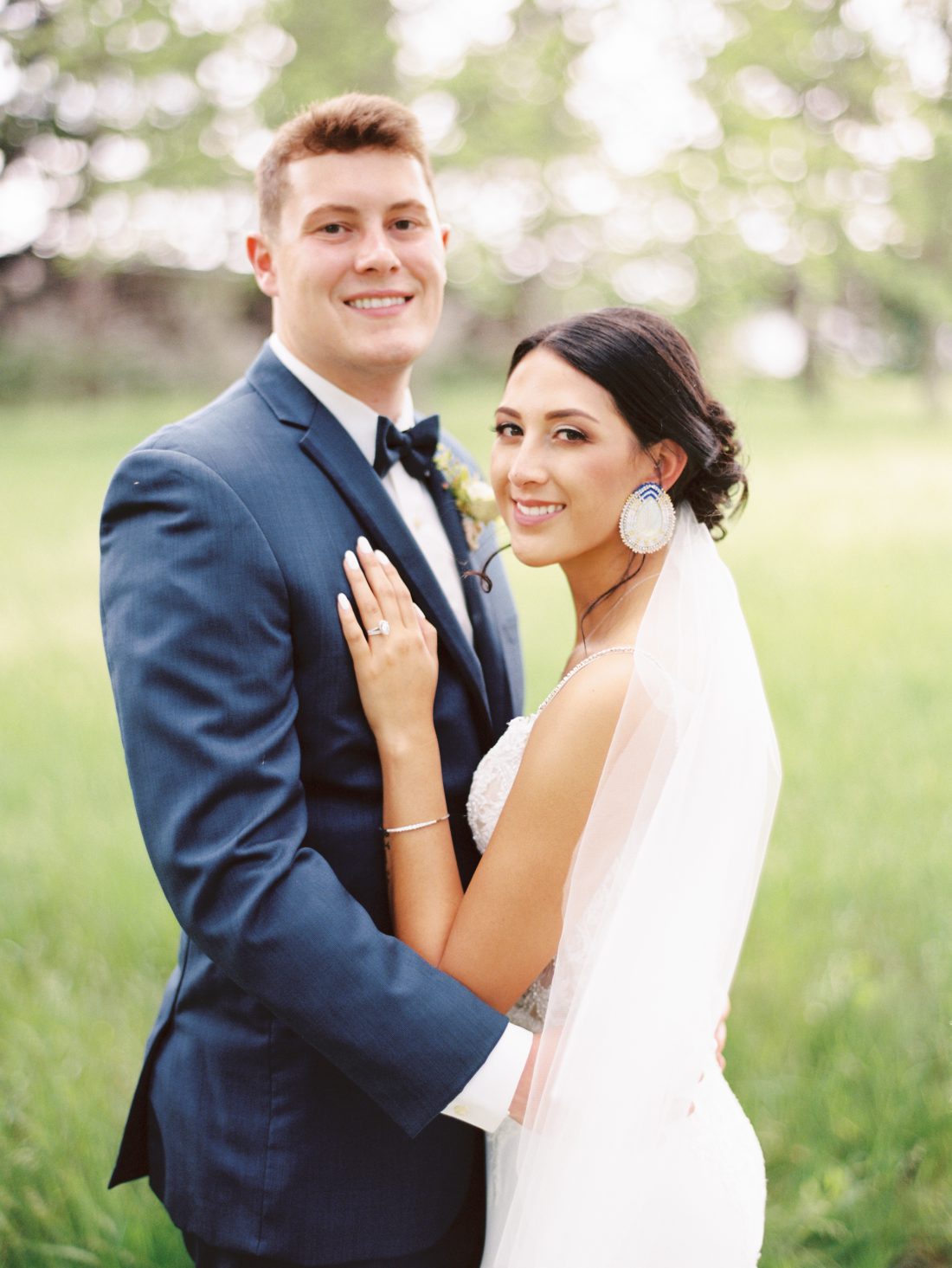 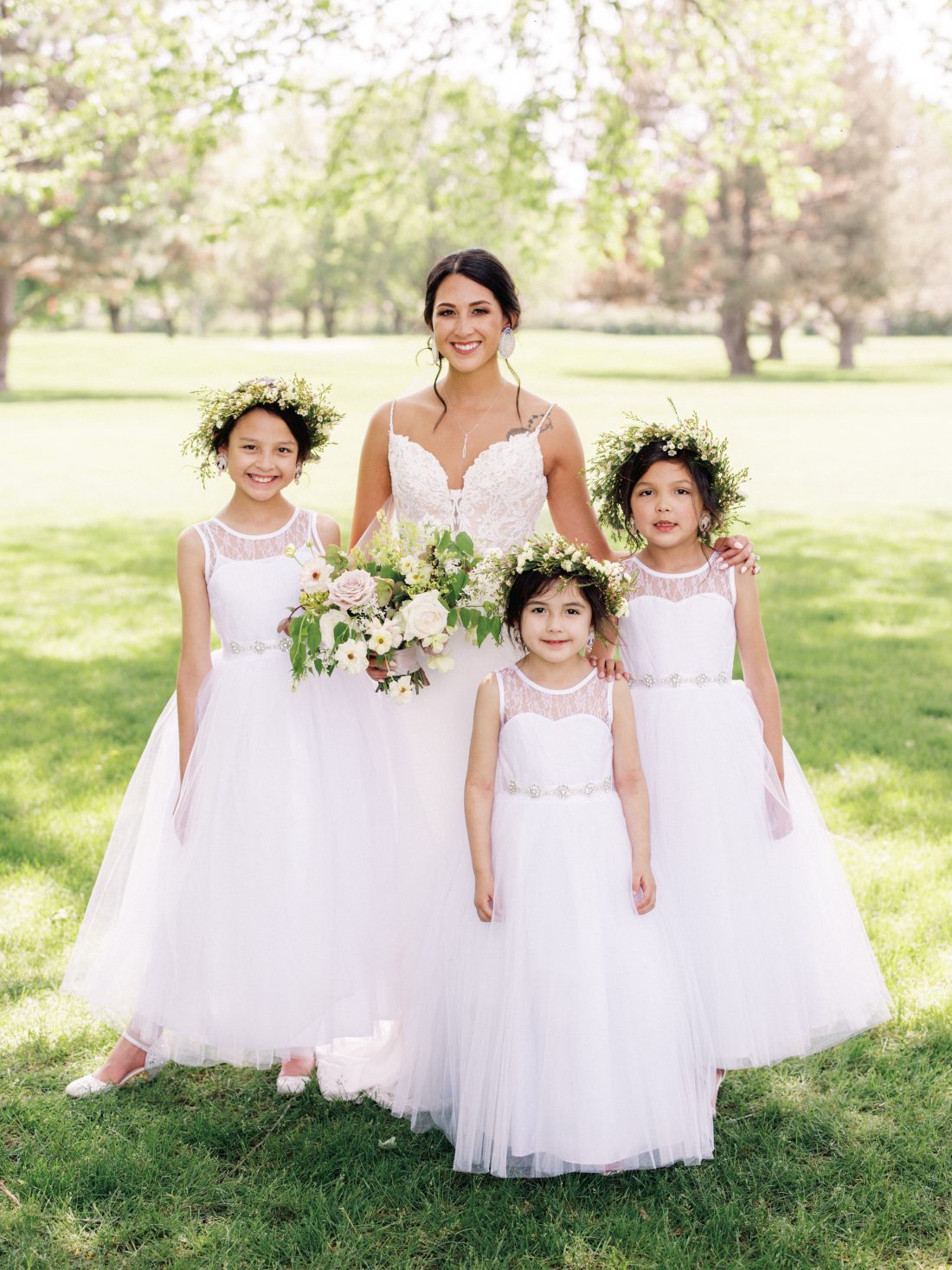 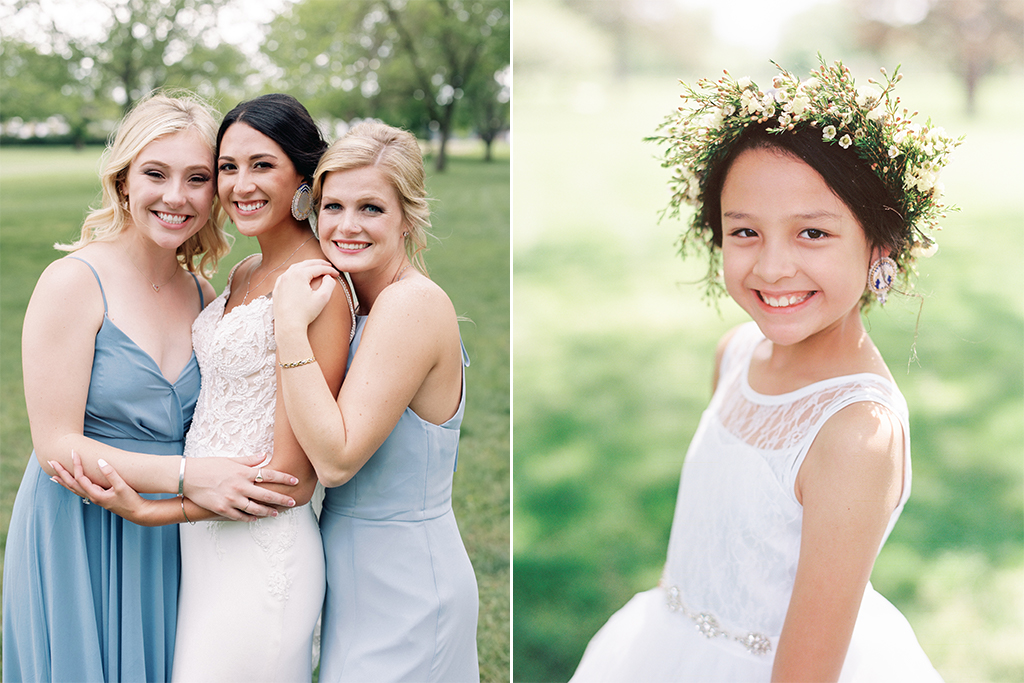 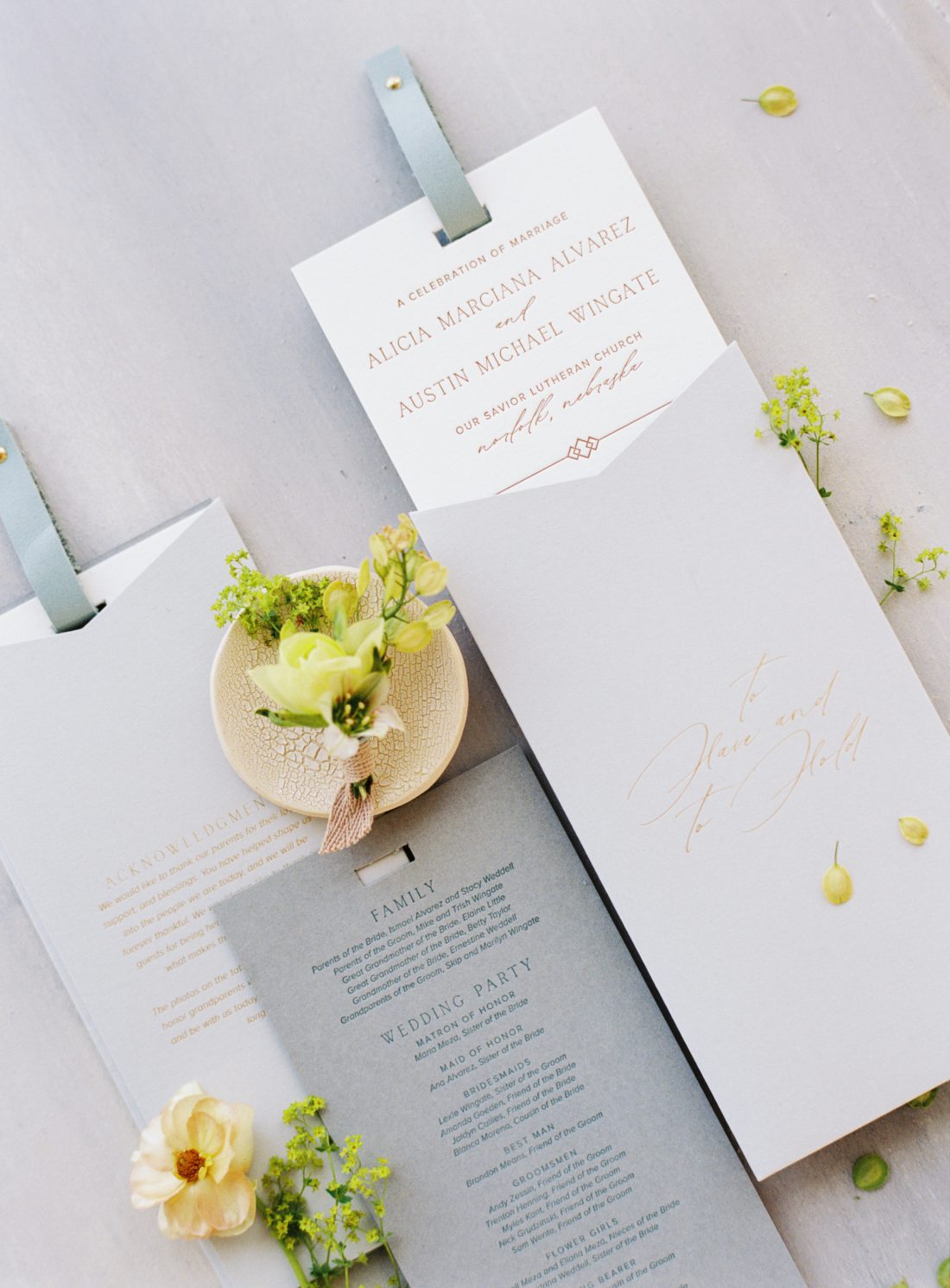 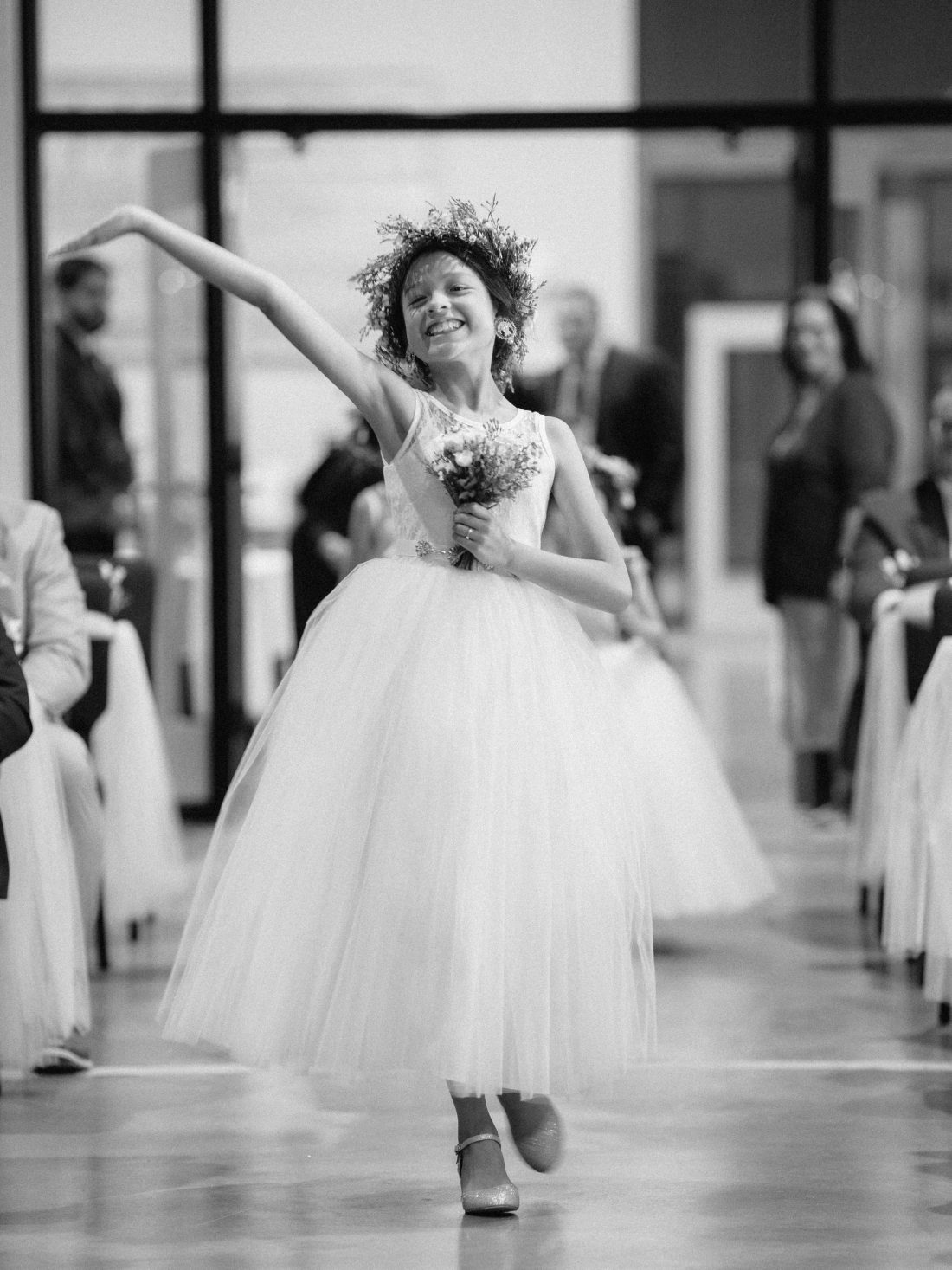 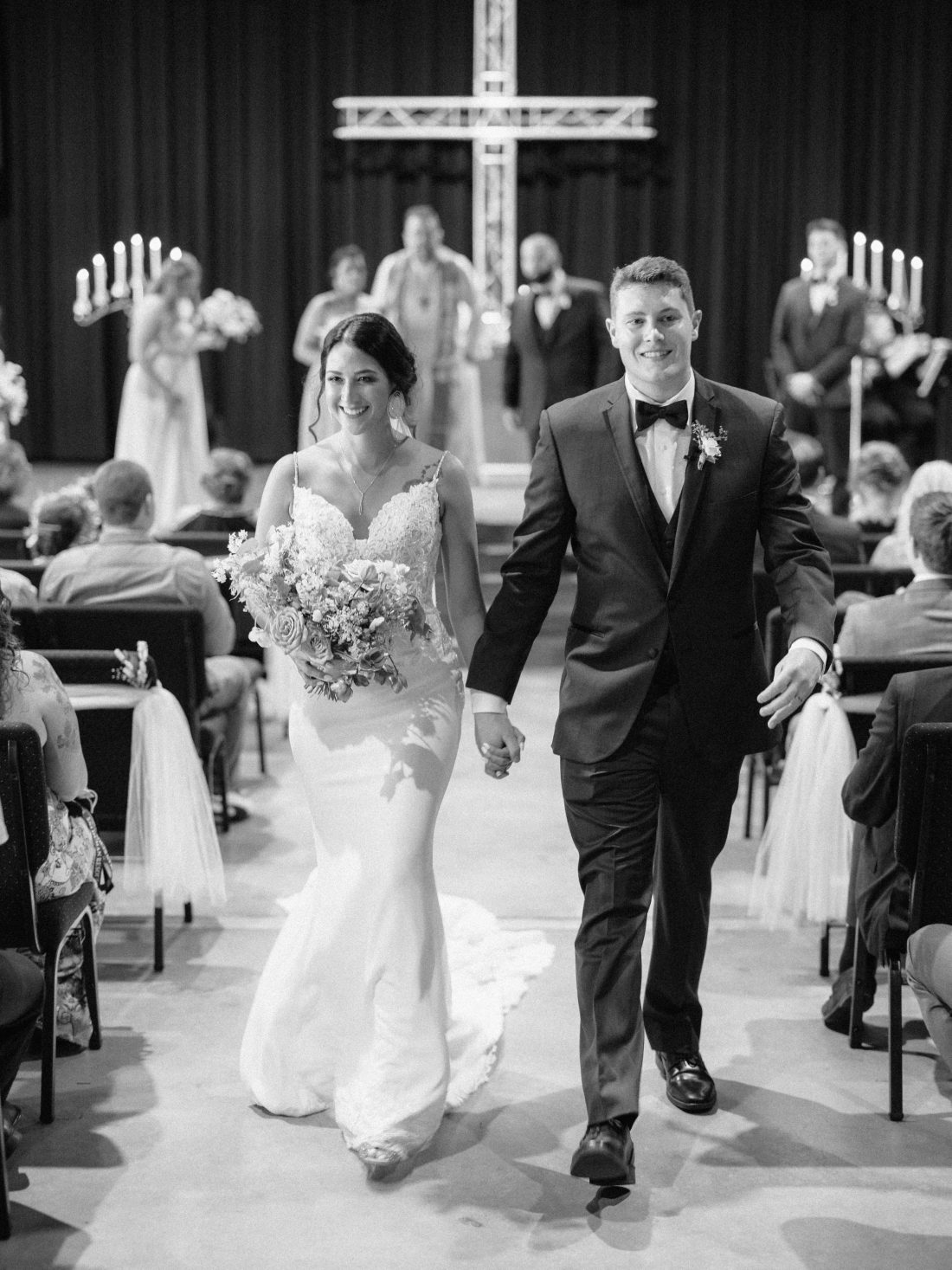 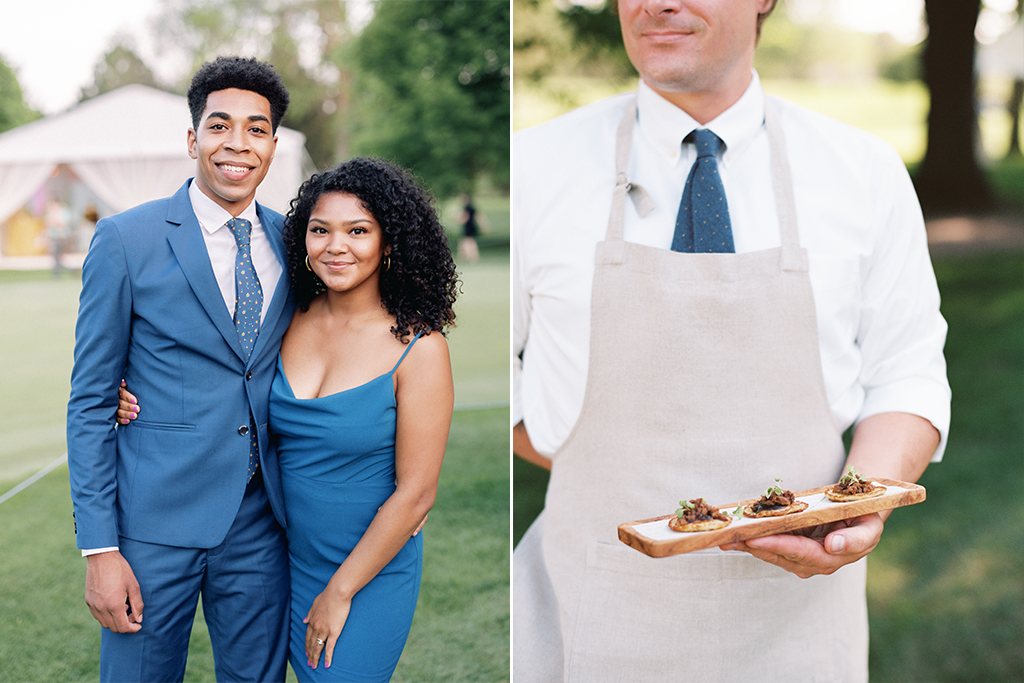 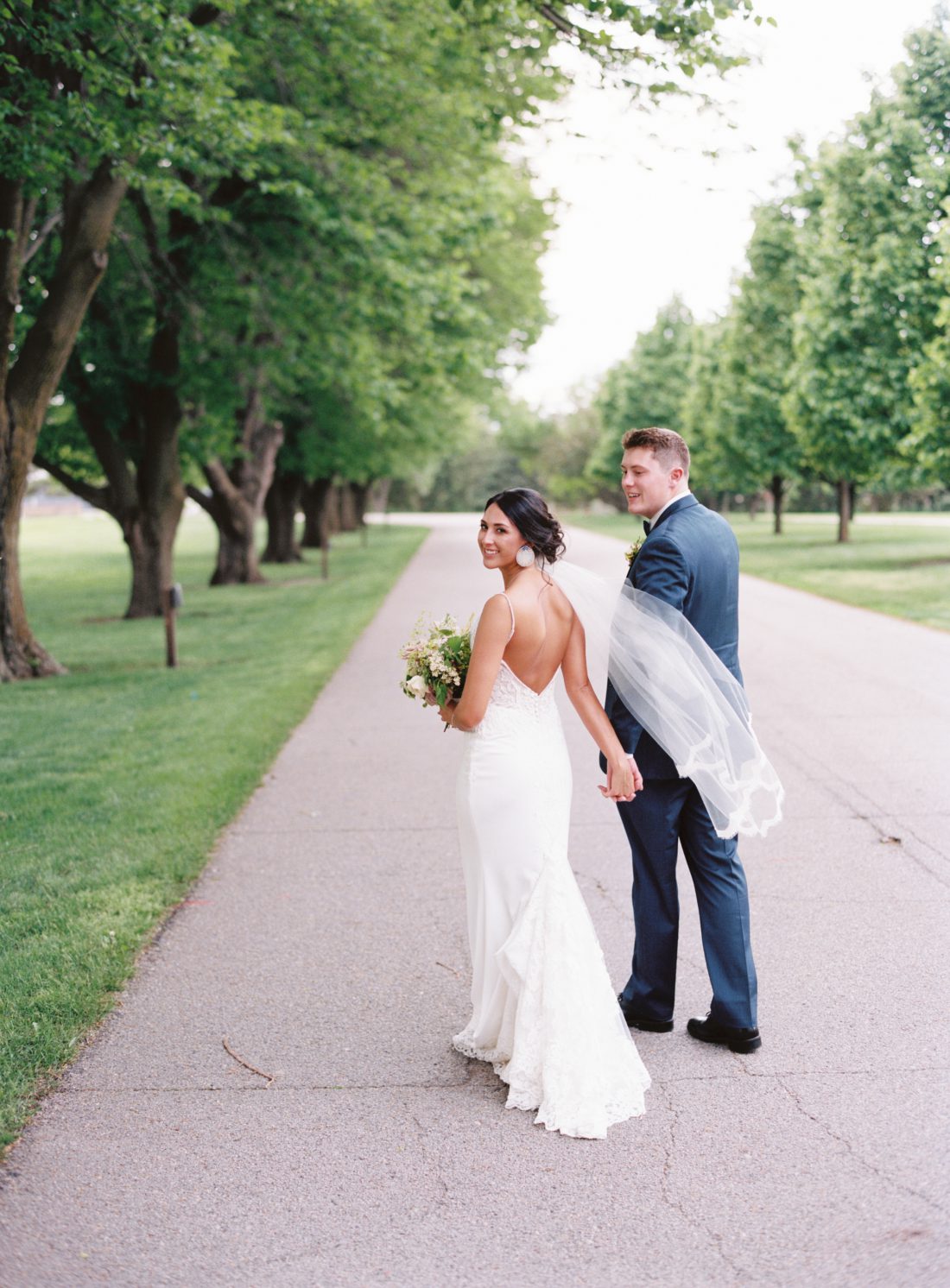 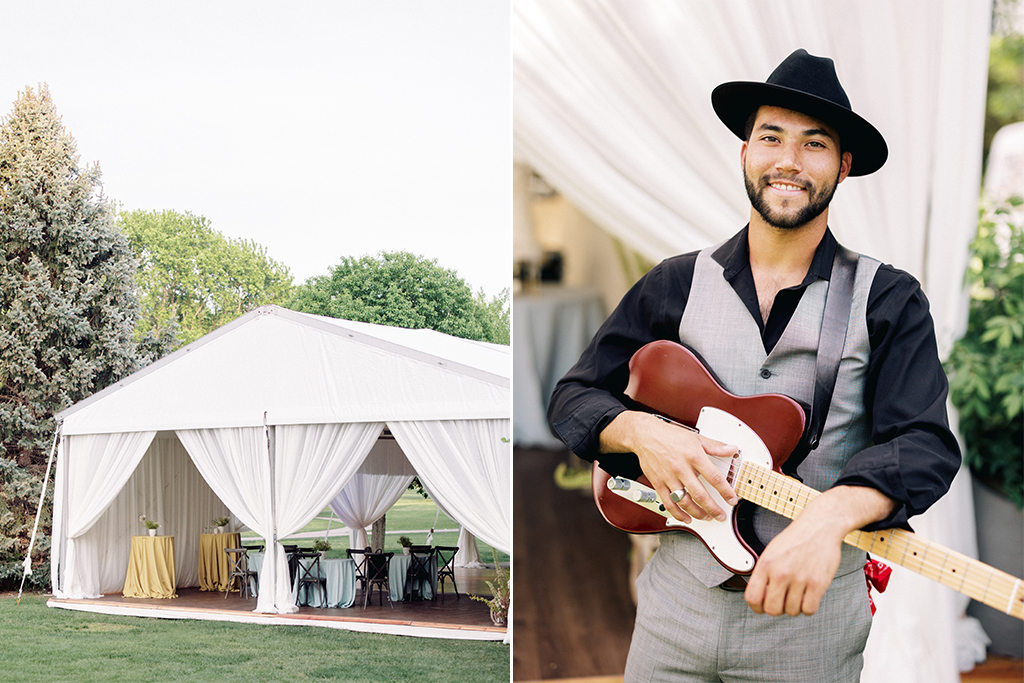 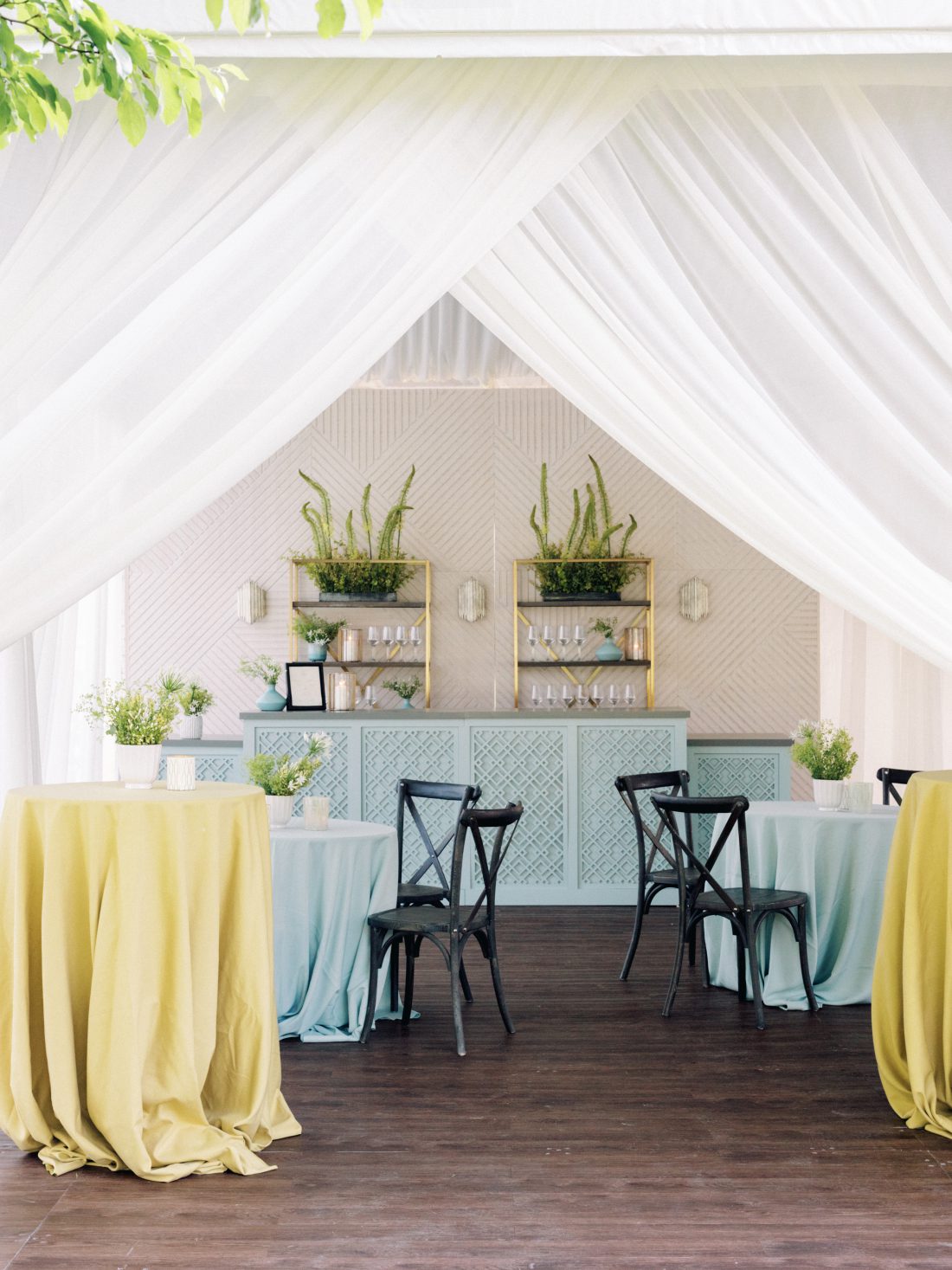 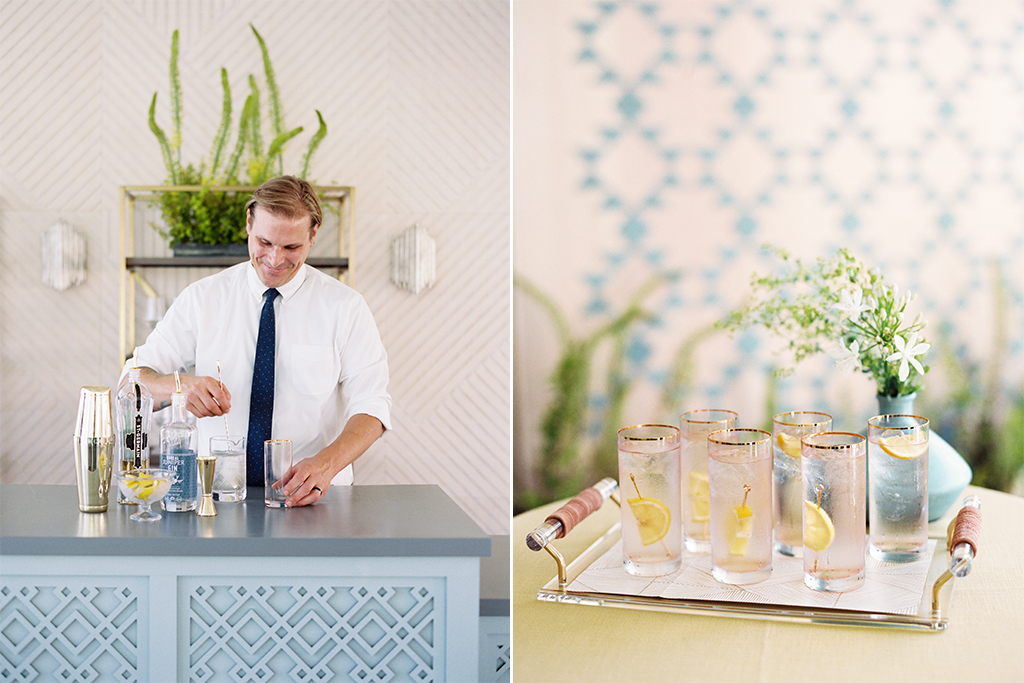 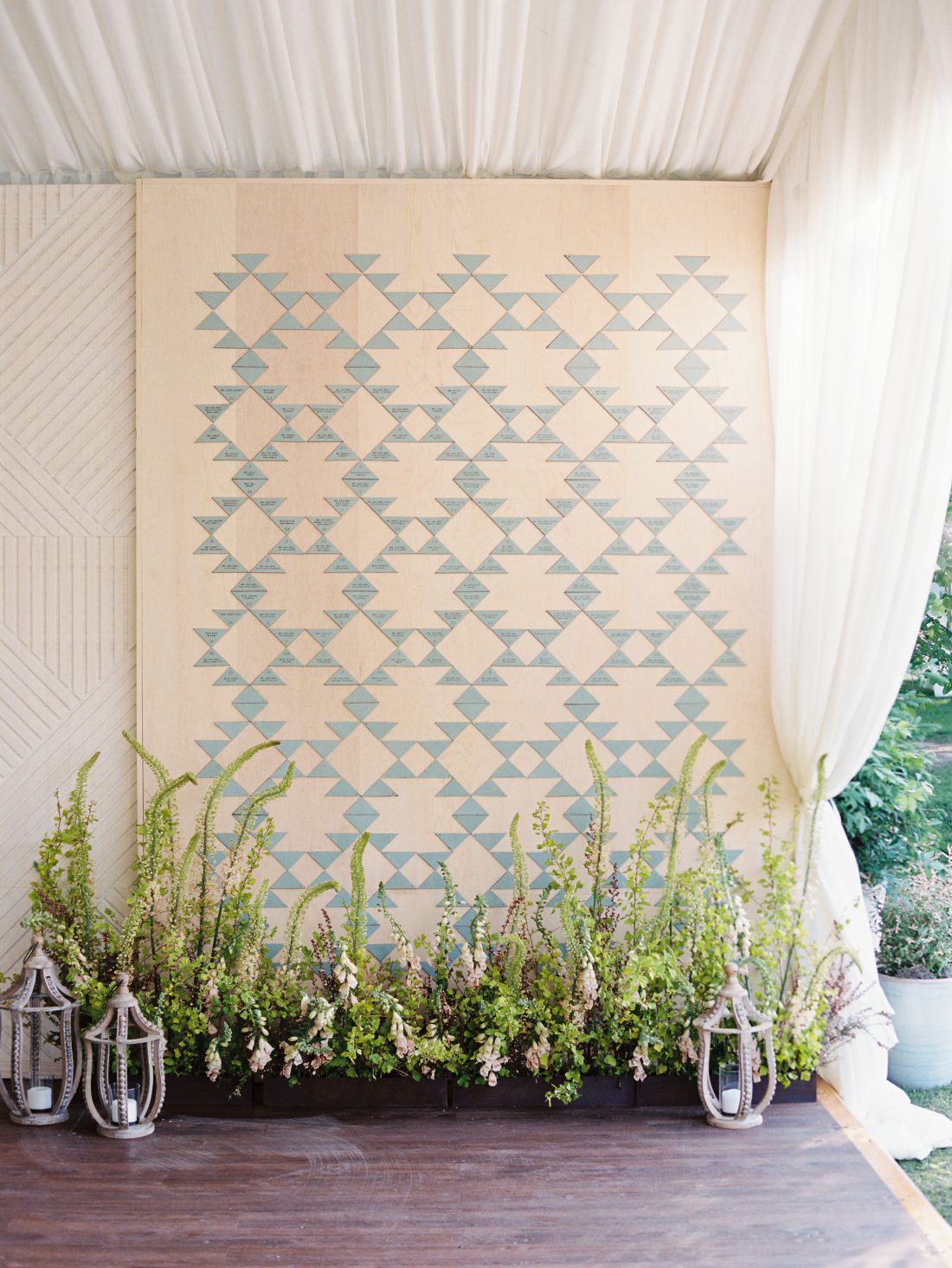 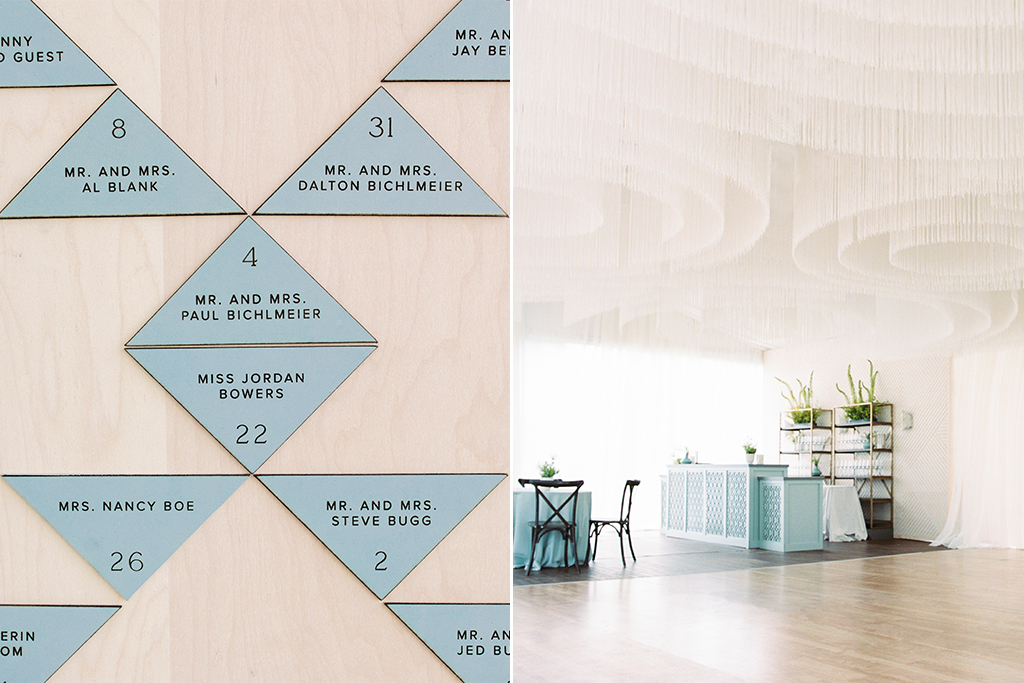 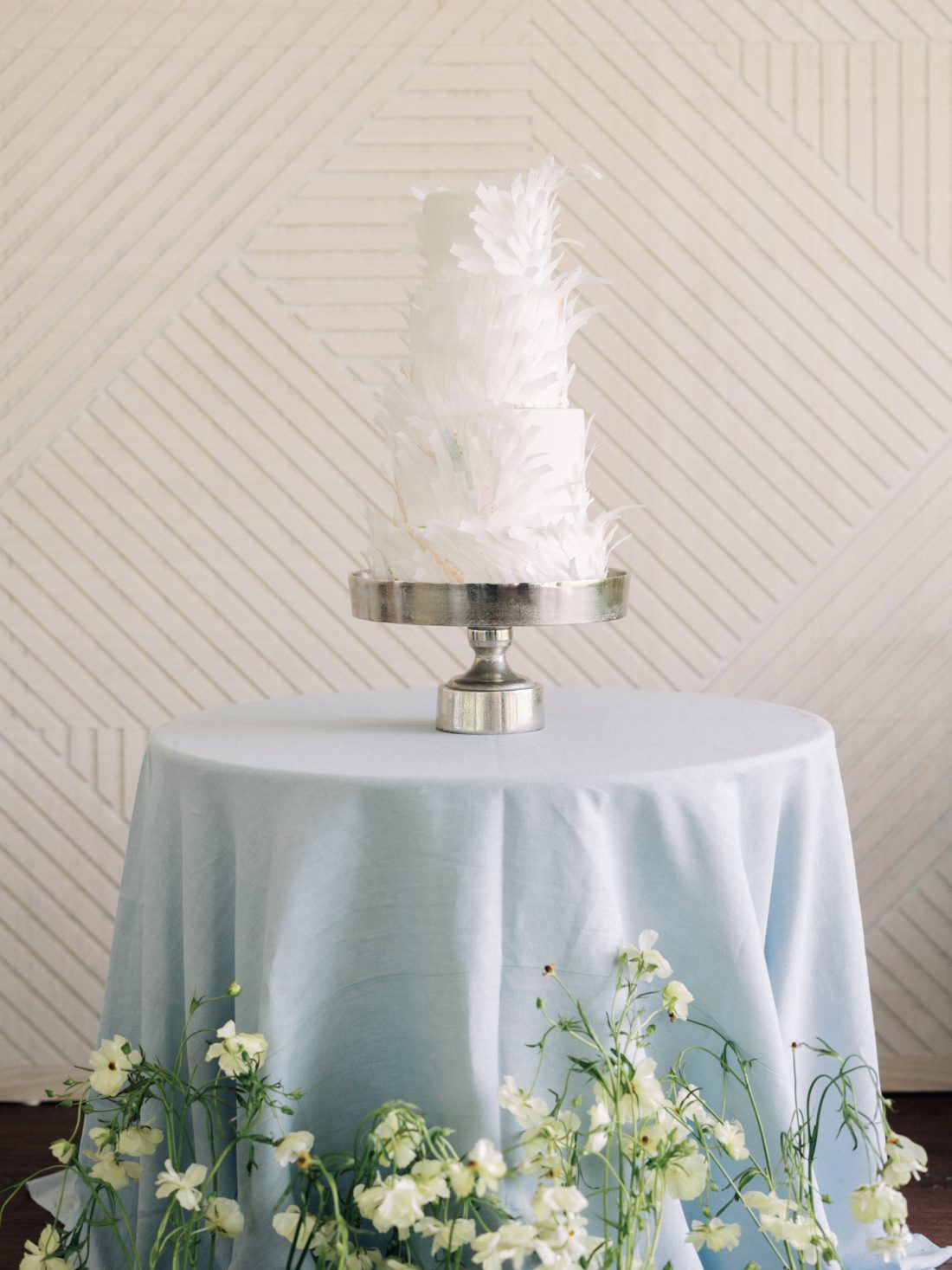 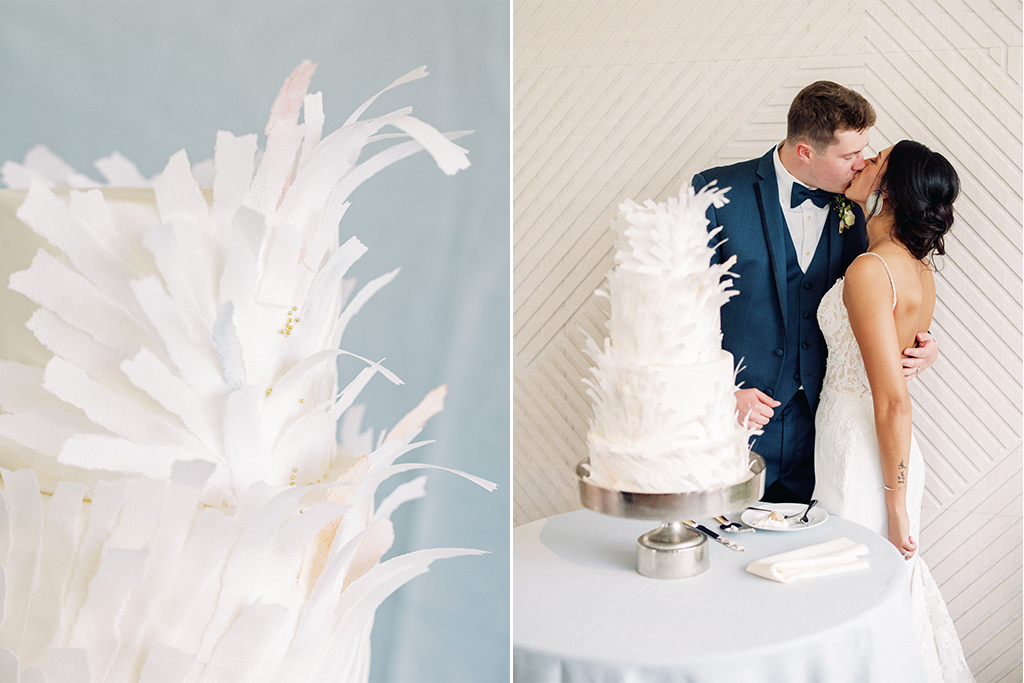 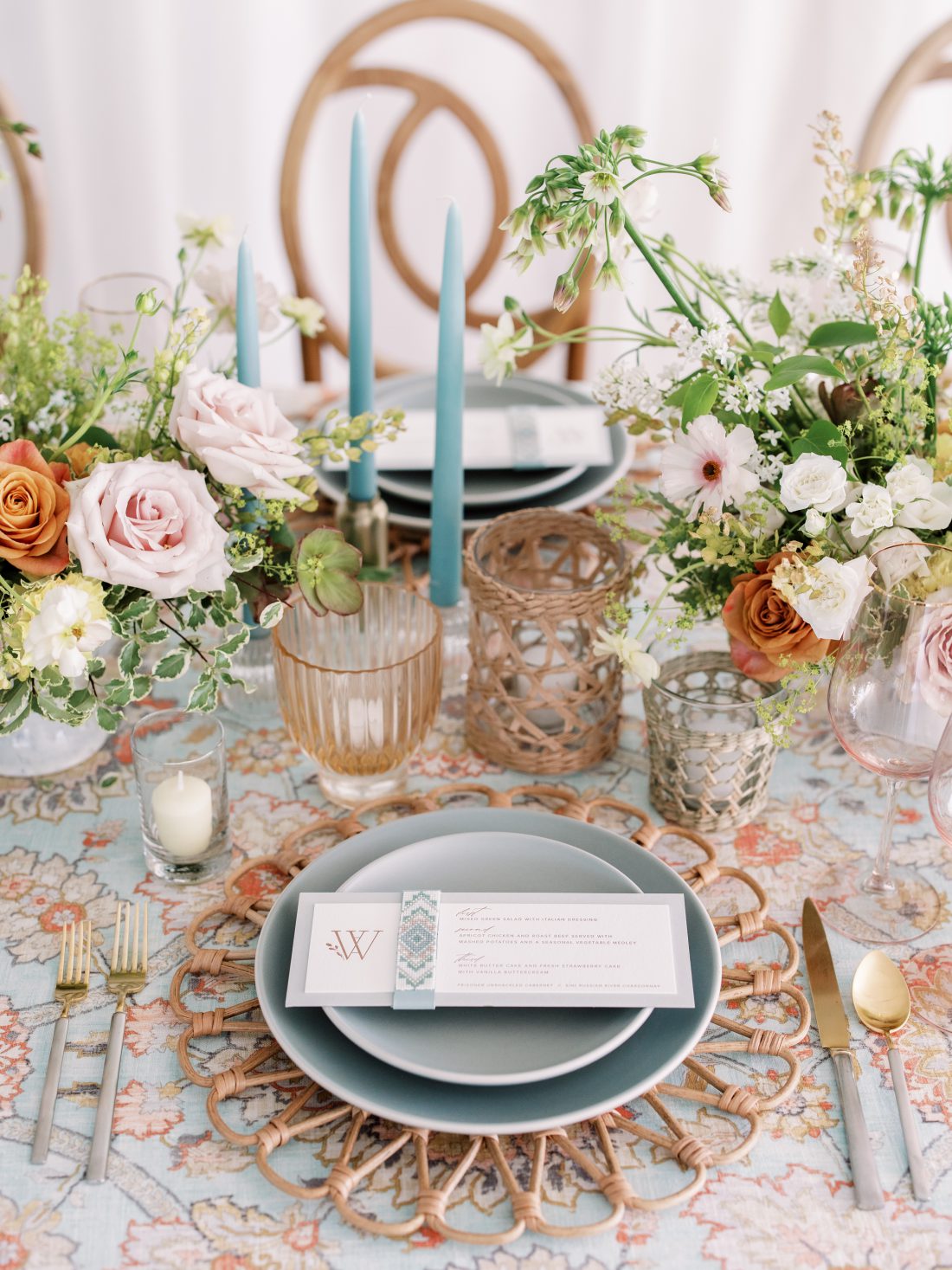 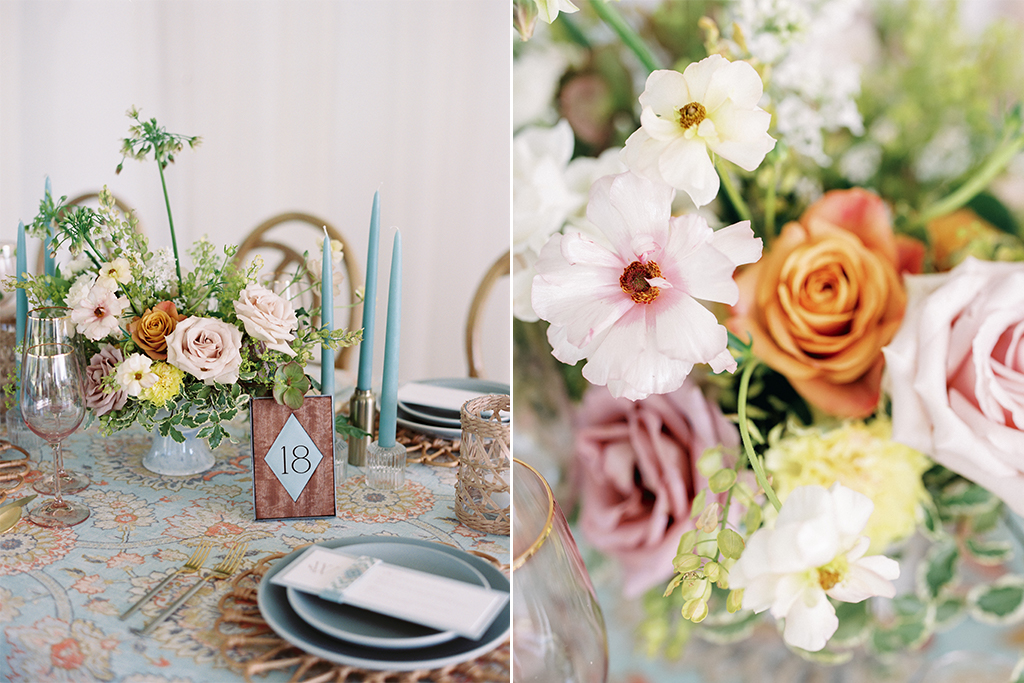 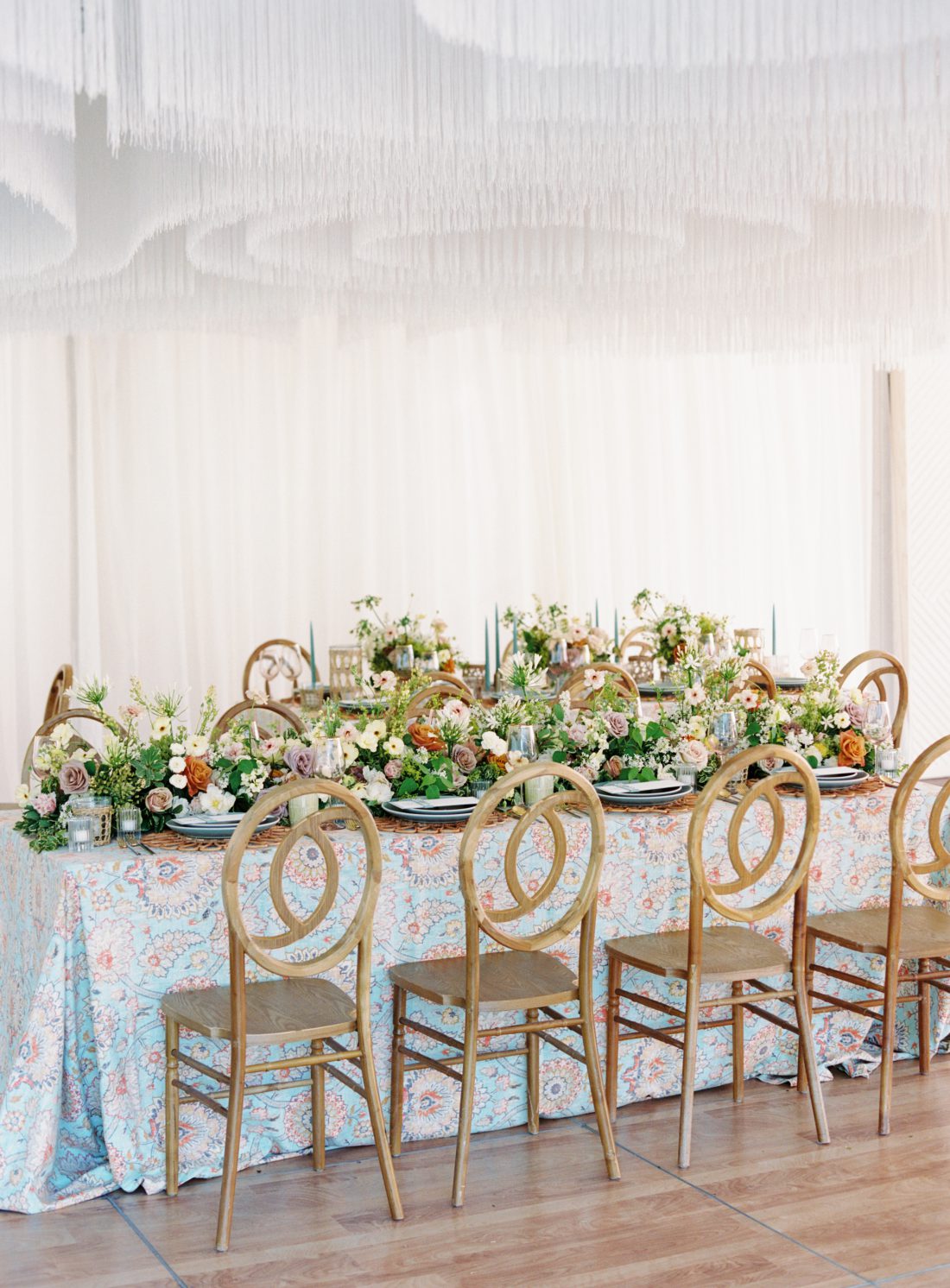 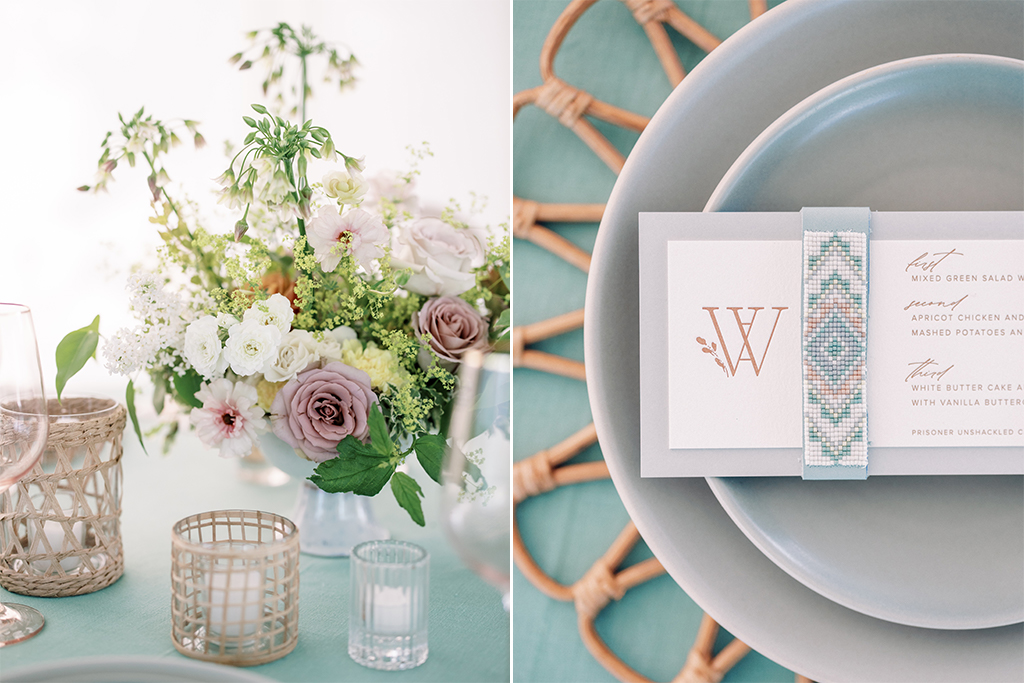 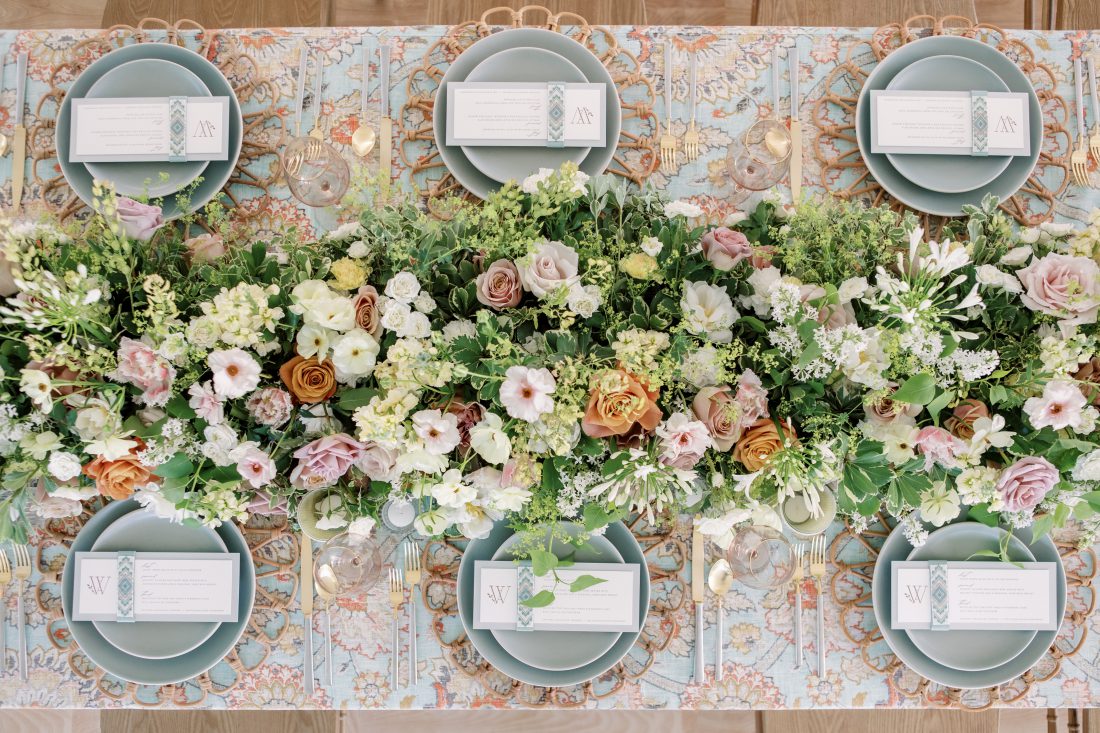 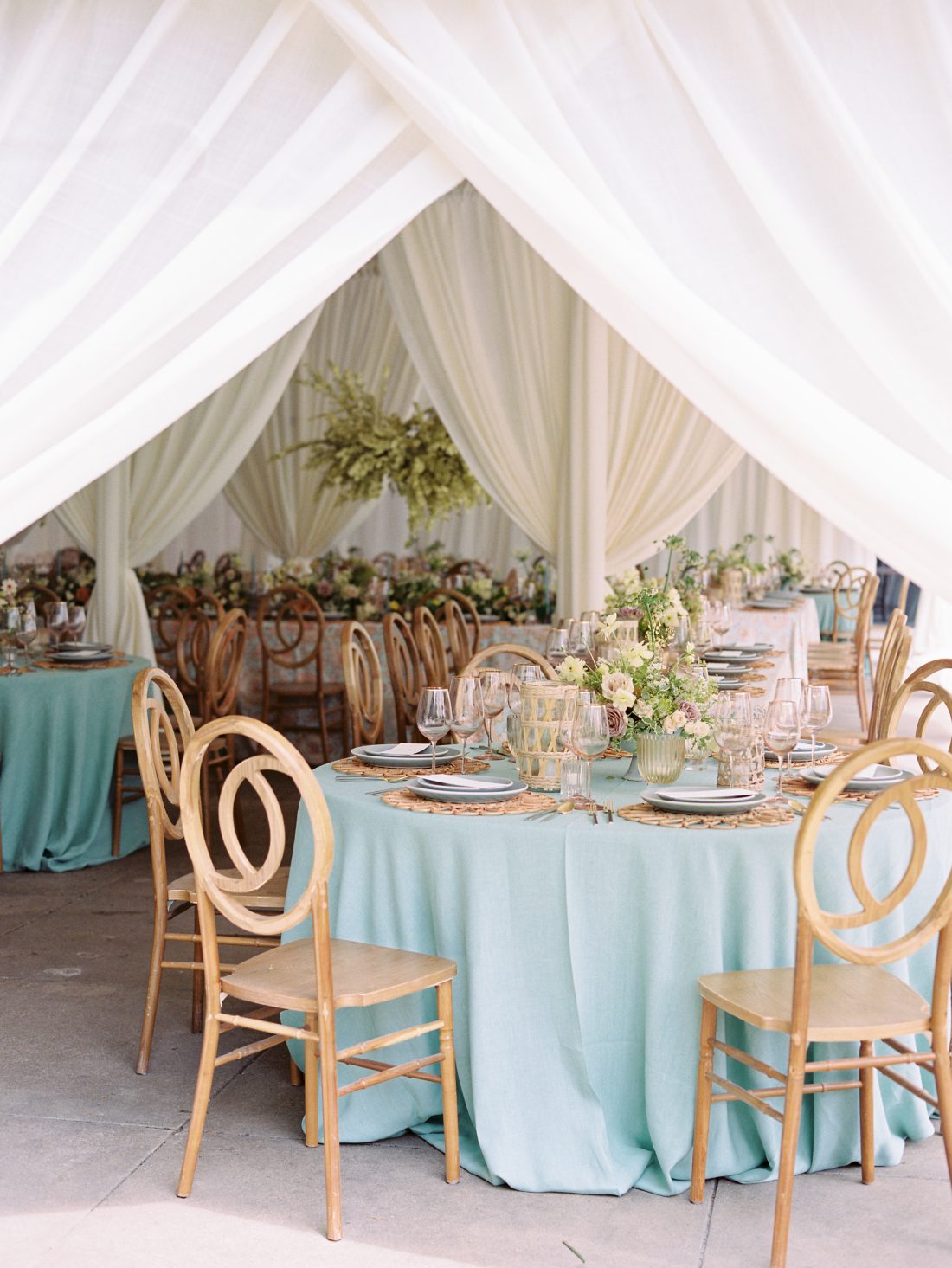 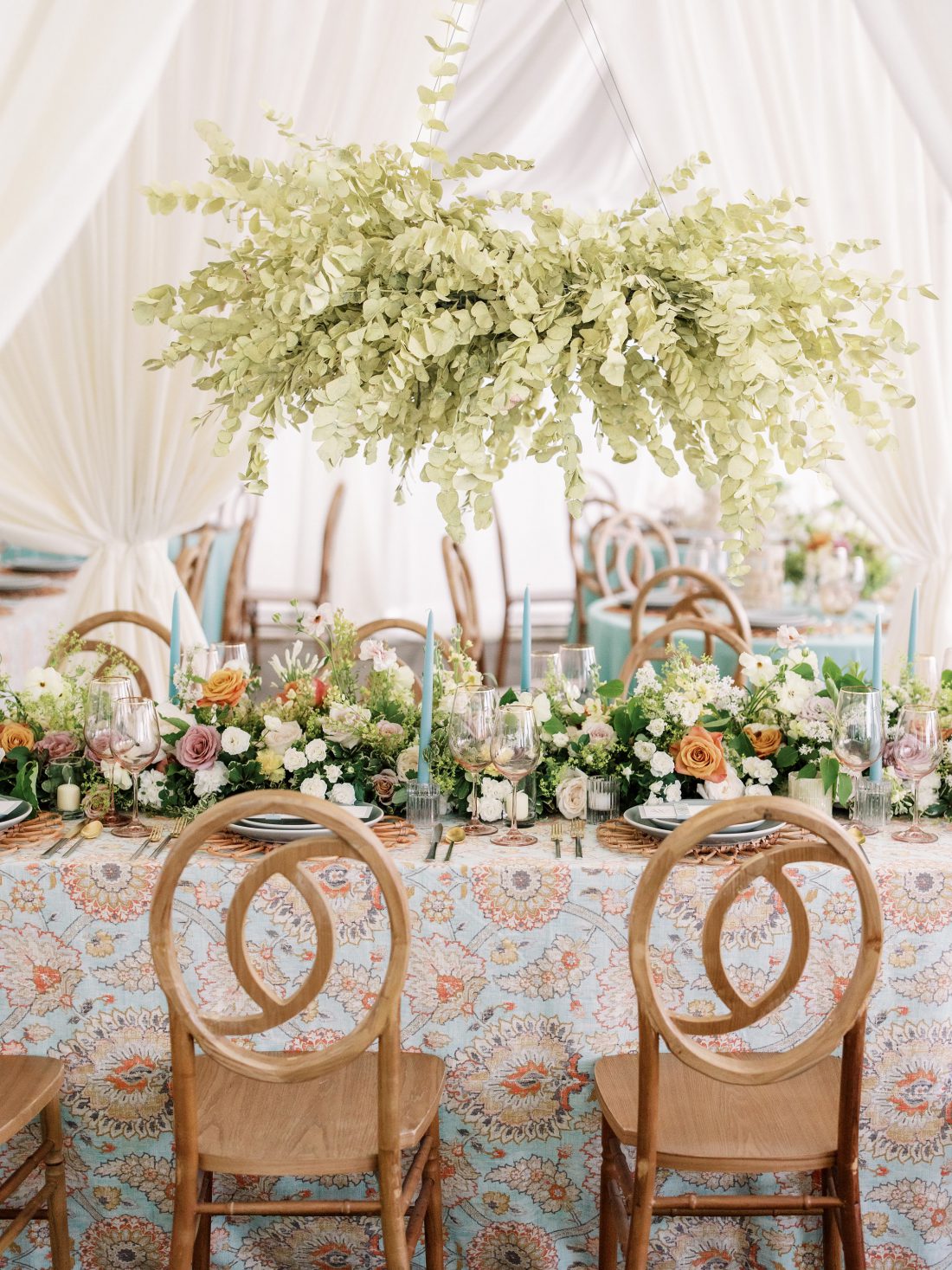 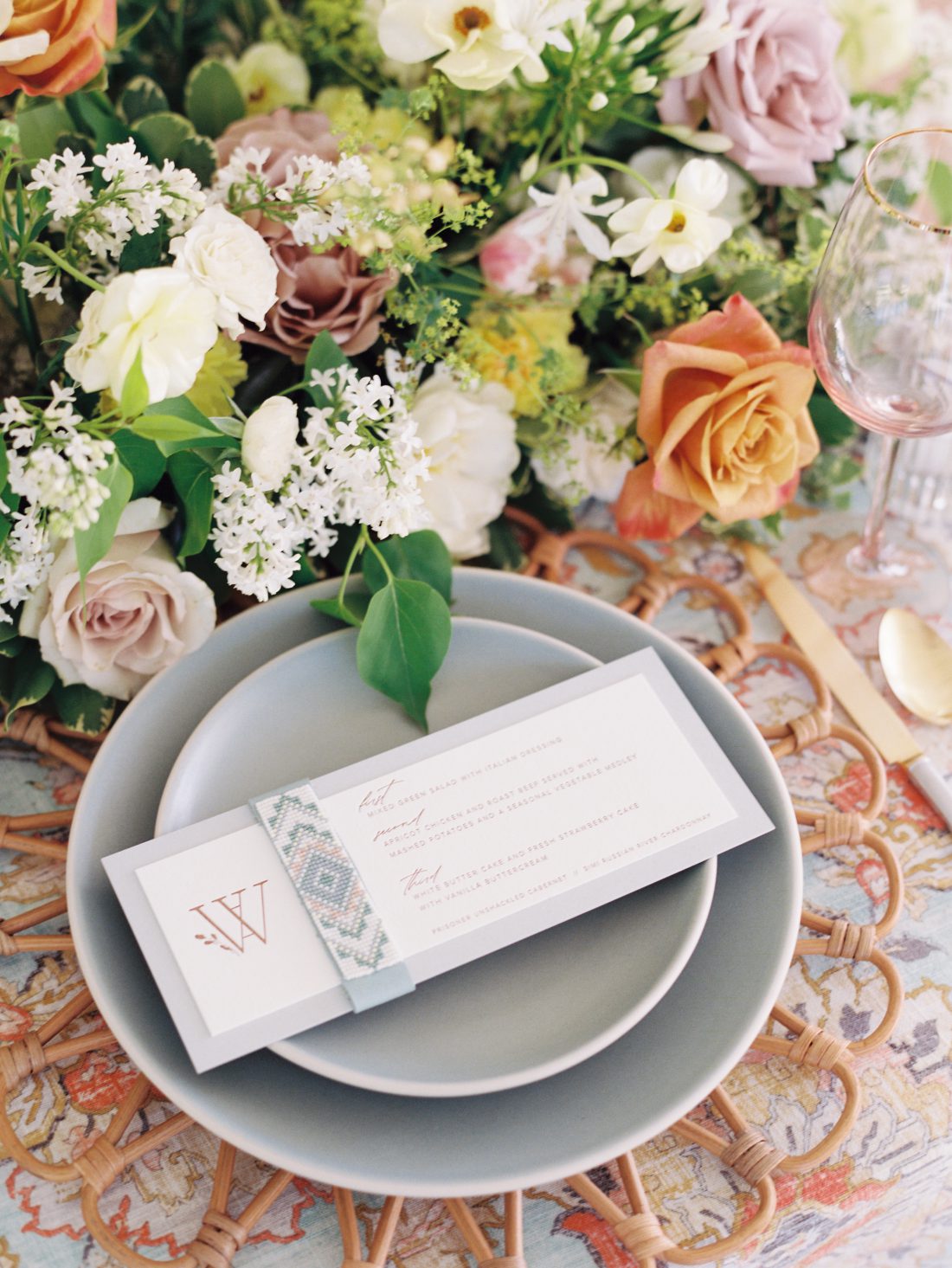 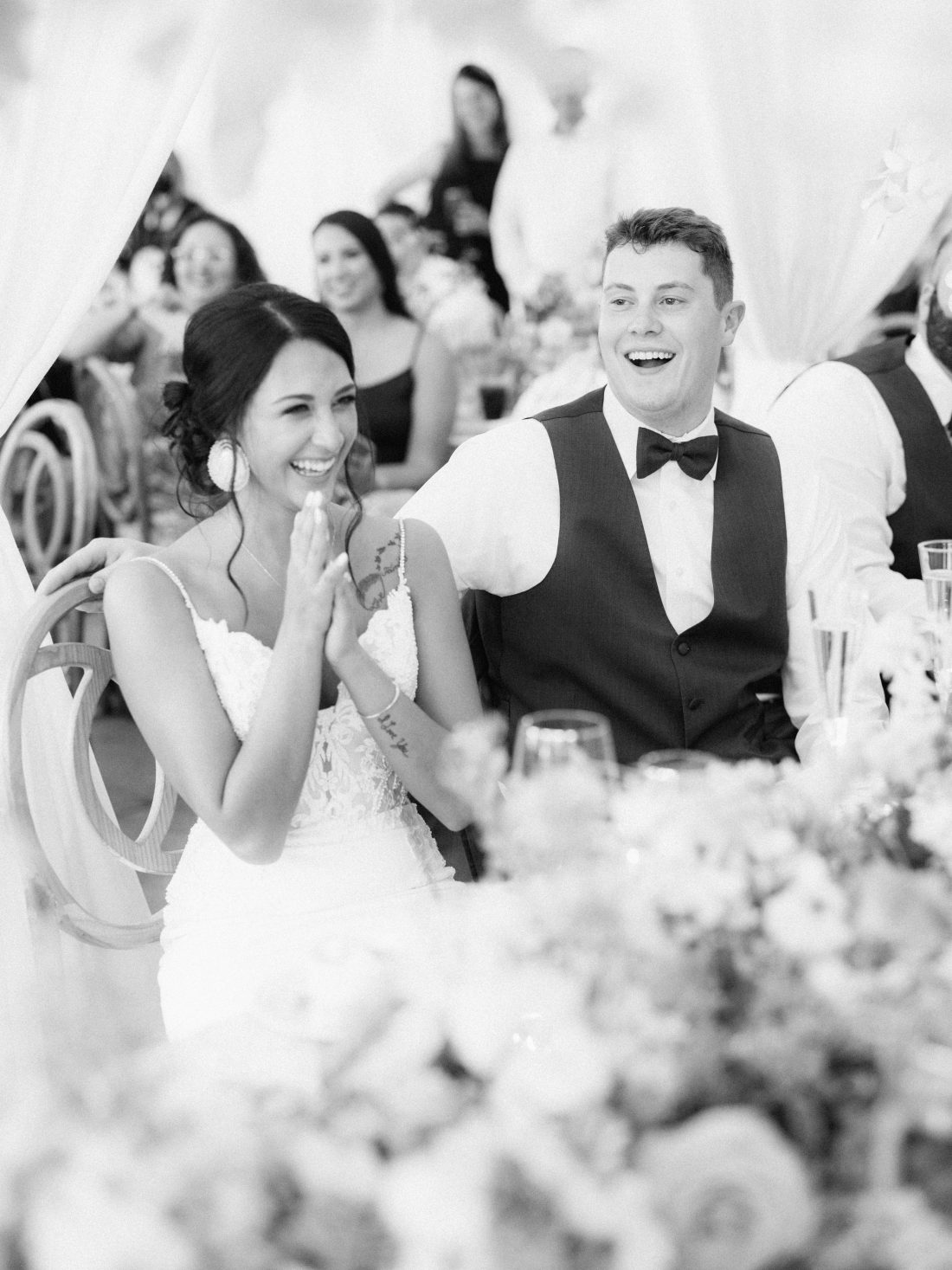 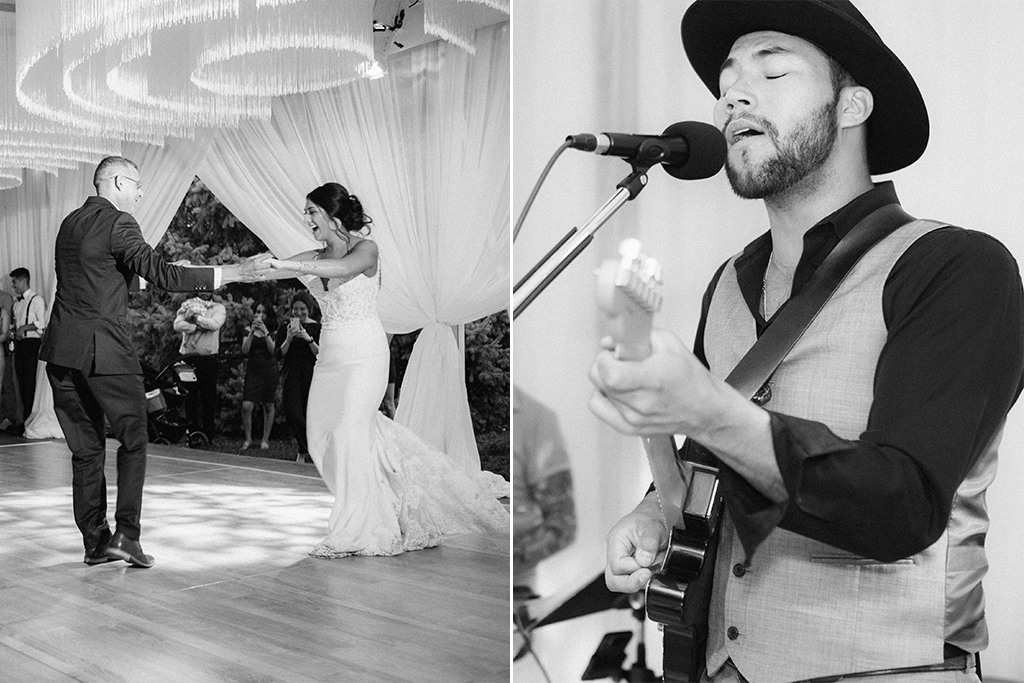 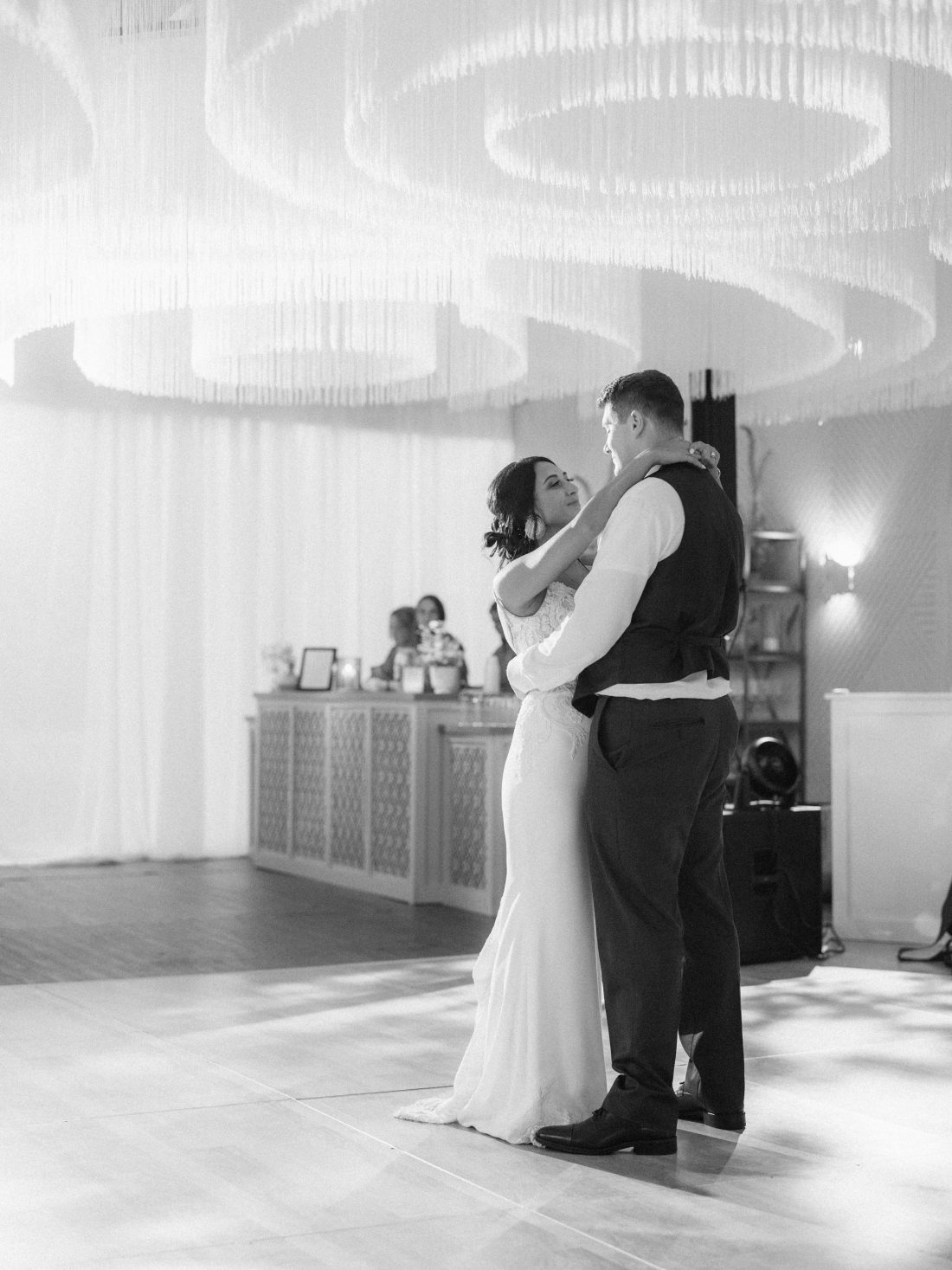